Do you have these Female Symptoms of Herpes?

The female symptoms of herpes are often unnoticed by women. They think that they might have something else.

If you're worried that you have some female symptoms of herpes... you're not alone.

An estimated 25%!! of American women have genital herpes. Isn't that amazing?

And 60% of women with genital herpes show no or very little symptoms hence they don't know they have it and could be transmitting it to others.

And up to 70% of American women have some kind of herpes virus, especially oral herpes (HSV-I).

So take a deep breath. If you have herpes, you're life will not end. But it will change.

And if you notice something strange going on in your genital area as a woman, you just might have the female symptoms of herpes. In fact, you might have had it for a while.

OUTBREAKS are the obvious Female Symptoms of Herpes

Have you had these female symptoms of herpes for a few days?

Did you get a blister or sore in your genital area?

You will get a cut, sore, blister or lesion.

Or you might get many of them. They mainly look like cold sores that you get on your mouth.

It normally starts off as a an itching or irritation in the genital or vaginal area. At this point many women often mistake this for a yeast infection.

A few days later, the skin will break out in red blisters which will have small bubbles of pus on them (I know that sounds gross.. and it is kinda gross). This is the typical herpes outbreak. It can vary from mildly irritating to very painful.

On the first outbreak, the female herpes symptoms such as these can get very intense. With multiple outbreaks occurring at once, it can be overwhelming.

You might have vaginal herpes symptoms, then you might not even notice this at all. Mainly because you can't see it. But you might be feeling some strange sensations in your vagina.

But it can also happen in areas such as the labia, inner thigh, in the pubic hair, or even on your butt!

If you can visit your doctor or gynecologist during an outbreak, that is best. That way they can get a scraping and sample which is good for testing.

Otherwise to diagnose the female symptoms of herpes then they will have to do a blood test. And with blood tests, often the antibodies don't appear for weeks or months after the first outbreak (primary infection). 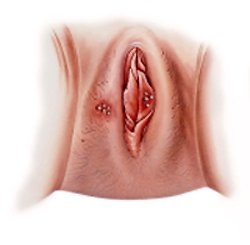 (illustration of what female Genital Herpes looks like during an outbreak)

The Female Herpes Symptoms During a Primary Outbreak

Here's some basic female herpes symptoms to look for...

These are all female herpes symptoms that you can get during a primary outbreak.

A primary outbreak can vary in length but it usually occurs from 2-25 days after first exposure to the virus. Yes, it can happen that fast!

It can also last up to two weeks.

Fever and flu like symptoms are common during this primary outbreak as your immune system is battling the virus.

Again, up to 60% of women never notice the female symptoms of herpes so if you're unsure, go get tested by a good doctor.

So What Do I Do Now?

General bit of advice is this. If you notice something out of the norm in your genital area then you should go visit a doctor (preferably a gynecologist) and get tested as soon as possible. Though you need to see a doctor that is highly experienced with STDs.

A herpes diagnosis either positive or negative is infinitely better than walking around "not knowing" or "hoping that you don't have the female symptoms of herpes".

Even then, many doctors are not experienced at diagnosing or identifying herpes. Best is to visit a dermatologist, gynecologist, or a clinic experienced in STD testing.

Sometimes they give tests that are not accurate or the doctors might just do a visual inspection without proper testing.

According to the A.H.M.F. (Australian Herpes Management Forum), genital herpes is under-diagnosed - of people with genital herpes simplex virus infection only 1 in 5 are diagnosed and, up to 80% of cases of genital herpes are not recognized as such by clinicians.

"I had to see 6 doctors at Kaiser before I could get the tests and be diagnosed. Doctors don't like to give someone a life changing socially stigmatizing diagnosis over what is, to them, a very minor condition that doesn't even give most people who have it any symptoms at all. So they avoid it." From an online Herpes Forum.

I highly recommend that you read this website for information about different tests before you go see your doctor: Information on Blood Tests for Herpes

Telling Your Partner About the Female Symptoms of Herpes

Here's the most difficult thing about having the female symptoms of herpes:

You must tell your partner. Whether that be your boyfriend, girlfriend, or husband.

You need to tell them, especially after getting tested.

This is the reality of living happy with herpes. We have to get very honest with people sexually.

It will be difficult, emotionally devastating, and one of the hardest things you'll ever have to do.

But it's the right thing to do. And you will feel much happier after it.

“Honesty is the cornerstone of all success, without which confidence and ability to perform shall cease to exist.” -Mary Kay Ash

Back to the top of Female Symptoms of Herpes Page

Back To Symptoms of Herpes

Back to Happy with Herpes Home Page